With all of the different elements of the Kinetic Sculpture in place it was time to do some laps around the parking lot to see what would break.Â  We’ve literally got lots of moving parts, so it’s important to see what we need to fix.Â  It’s much easier to repair a broken spoke in the shop than out in the street with no tools. 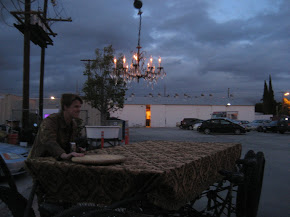 I hopped on for a short solo ride through the parking lot, but soon the other workers hopped on and we were doing laps.Â  Everyone was delighted to see it pass by and we gathered up a few friends and neighbors to get some more weight on the thing.Â  We brought it back into the shop, repaired a few final broken spokes and loaded the Feast onto the trailer for a quick pick-up the next morning. 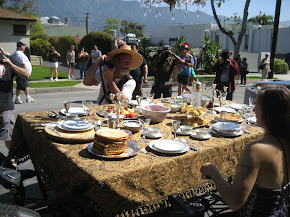 The day of the Pasadena Doo Dah Parade started early.Â  Aaron and I woke up at 6:00am to start getting ready.Â  We grabbed some breakfast and picked up the Feast from Syyn Labs.Â  We drove it up to Pasadena on surface streets and picked up our fancy table settings from the house on the way.Â  We parked a couple blocks away and started unloading the Feast.Â  Just the two of us were able to unload from the trailer, but it would’ve been easier with one or two others. 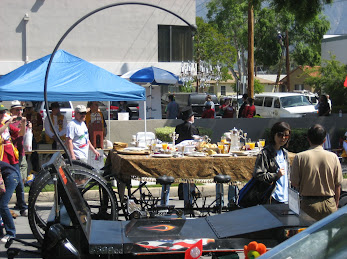 At this point some of the others started arriving.Â  We loaded up everything we needed on the Feast and started pedaling towards the parade starting point.Â  We were definitely getting a lot of attention.Â  We pulled in and started prepping the Feast for the parade.Â  We put out the tablecloth, put our food on the serving dishes, and mixed up a couple jugs of delicious mimosas.Â  Now all we had to do was pose for photos and wait. 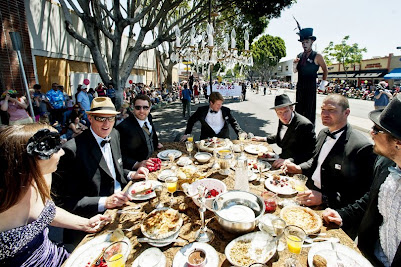 When the parade began we were thrilled.Â  Almost immediately though, two of our chain tensioners failed and we were down to only 3 pedalers!Â  They were struggling to go up the slight grade of Colorado Blvd.Â  Spirits were high anyway.Â  The crowd loved us.Â  The entire time we were pelted by tortillas and marshmallows.Â  It was a mess.Â  Eating while pedaling hard was more difficult than I imagined.Â  The butterflies in my stomach kept the hunger down though. 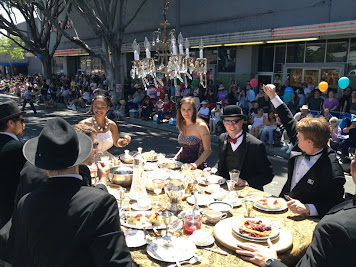 We rounded the two corners of the parade and started coasting back towards the end of the parade.Â  The parade volunteers were inviting us to continue for a second lap, but since only three of us could pedal, it was exhausting.Â  We decided to pull off the parade and begin the post-parade celebrations. 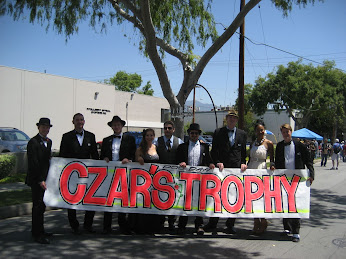 The main organizer of the parade had approached us right when we first arrived.Â  He was thrilled to see us show up!Â  He was expecting us, but had no real idea of what it was going to look like.Â  He hopped on and pedaled a bit, with a huge smile across his face.Â  He left and returned with a banner.Â  The “Czar’s Trophy.”Â  It’s apparently the only award they give to participants of the Doo Dah parade.Â  We were thrilled and humbled to receive it.Â  We weren’t intending to compete for anything, just to have a great time and test out our kinetic sculpture in a real environment.Â  We couldn’t have been more pleased!Â  Thanks Doo Dah!

At the end of this short clip you can see the Feast in action:

On a final note, I just wanted to thank everyone who helped out A Moveable Feast. From all of the Kickstarter supporters to everyone who showed up for just an afternoon of metal grinding at the lab. From the bottom of my heart, thanks so much for supporting me and this crazy project. I feel extremely privileged to have such awesome help in bringing my dreams to reality. Thank you, thank you, thank you!