We had only had 14 days until the Doo Dah Parade, and we had a long way to go, so we stepped things up into high gear.Â  I started working every day and recruited as many helpers each day as possible.Â  I didn’t take time out of my day to blog, as I needed all of my time for work and sleep, so this is the culmination of almost two week’s work. 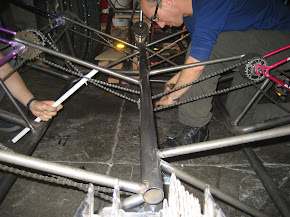 One of the elements that we needed to solve was the important drivetrain.Â  At first we tried hooking the cables straight to the sprockets on the driveshaft.Â  We attempted a “figure 8” to get all of the gears turning the correct direction.Â  But, this solution has a lot of problems.Â  There is almost no way to tension the chain, except through the use of half links.Â  And once it is tensioned there’s really nothing to keep the chains aligned.Â  Even a slight bending of the frame would knock the chains off of their sprockets.Â  We had to come up with a better solution. 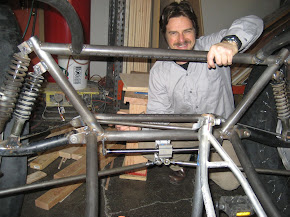 Meanwhile Oren made some great progress on the steering mechanism.Â  We had a linear bearing that was sliding back and forth across a ground rod as our “rack and pinion”.Â  The problem with this was that it allowed for rotation of the linear bearing, which would cause toe-in or toe-out on our steering.Â  We needed to restrain just one more degree of freedom for this to work. 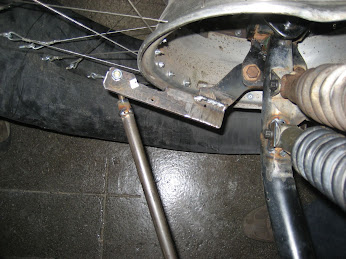 Oren cut some metal attachment points.Â  The goal was to push and pull on the point that is aligned with the Ackermanm Steering geometry.Â  To do this we had to go around our aluminum hub.Â  We had to make some clearance cuts to allow for the dent in our Prius wheel.Â  (All four of our free wheels have nasty dents on where the tire’s bead was supposed to seal.) 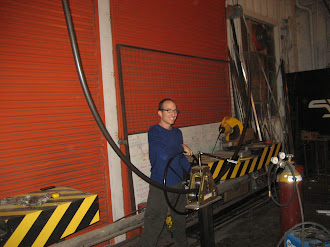 On another workday, Paul and I decided to focus on a particular feature of whimsy.Â  It certainly wasn’t needed to get the Feast moving, but it was still very important, artistically.Â  We grabbed our last long tube of 1 1/2″ chromoly tube and started running it back and forth through the tube roller.Â  I’ve never rolled something with such a dramatic curve to it.Â  We found it necessary to take turns steadying the tube and “steering the boat” as it gets exhausting. 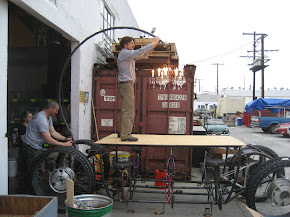 I welded a ball on the end of the tube with a hook so we could hang the chandelier.Â  You can see the fun curve of the holder as Oren hangs the 10 light crystal chandelier over the table.Â  We ran the wires through the tube so they would be neatly out of the way.Â  The details really make it fun. 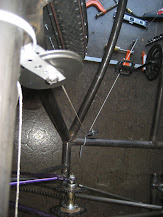 We were getting very close to some actual live tests of driving around the parking lot.Â  We needed a way to connect our steering mechanism in front of the vehicle to the lazy suzan we had planned for the steering in the back.Â  We guessed at the pulleys, zip-tied them in place and ran some string just to check.Â  They worked perfectly.Â  We only needed 6 pulleys to get the cables where we needed them to go.Â  We welded some studs into place to hold the pulleys and it tested out perfectly.Â  Not pictured is our solution for the rotating linear bearing.Â  I used another ball bearing that was running through a piece of unistrut as a guide.Â  It doesn’t overconstrain the steering, and only keeps the linear bearing from rotating.Â  That fix only cost about $20 in parts, so I’m calling that a success. 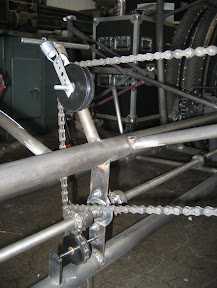 After talking with Scotty C down in San Diego, I finally admitted to myself that we needed to put in tensioners.Â  Scott pointed out that if the frame flexes then our tight chains will either stretch or snap.Â  We needed some spring action to allow for movement on every chain drive.Â  I also followed Carl Mueller’s advice on how to make the tensioners out of Delrin and to reverse the direction of the chain without a figure 8.Â  I bought a length of 2 3/4″ diameter Delrin rod and made some simple chain pulleys on the lathe.Â  Both of these sensible solutions were relatively easy to implement.Â  I was just lazy and was trying the really simple solution first.Â  “If you don’t have time to do it right the first time, you’ll find time to do it right the second time.” 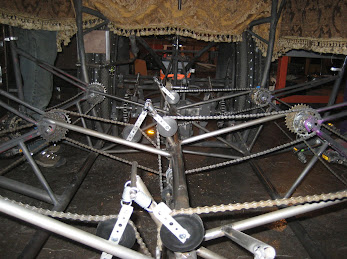 In this view of the undercarriage of our kinetic sculpture you can see the beautiful tablecloth that Meagan and Holden put together.Â  The fringe around the edge wasn’t cheap, but it’s another one of those details that really makes it something special.

We were right up against the deadline of the Doo Dah Parade.Â  We were very excited to get it running and finally do a little showing off.Â  Not everything was perfect, but it as good enough for a very short street parade.