No, they're not painted red.

The ugliest part of my Spitfire has been the wheels.Â  I had intended on cleaning them up and re-painting them, but having the vehicle undriveable for a few days to do so was unthinkable.Â  But, with the car laid up with the transmission work, it was a great time to get this done.Â  The rust may look pretty bad, but it was mostly just on the surface.Â  A Scotch-Brite pad, CLR, and some elbow grease got rid of almost all of the rust.Â  The rest was in the grooves which were hard to get at, but also hard to see.

I took a trip down to the auto paint store and bought some primer, some adhesion promoter and finally some white automotive paint.Â  John Wee, the owner of Daisy Mint, and I followed the directions carefully, which really just means waiting enough between coats.Â Â  A few bugs tried to kamikaze onto the paint and ruin it, but we carefully picked them out with a pocket knife.

After a couple of days for the epoxy paint to completely dry, I took them to the tire store and they put the tires back on and rebalanced the wheels.Â  They were nice enough to put the lead weights on the inside of the rims so the outside remains beautiful.Â  Plus they gave me a great deal. 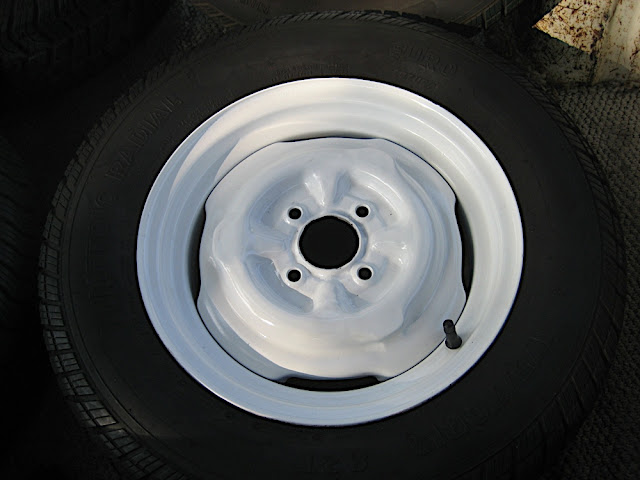