For the past few months I’ve been driving the EV Spitfire stuck in 3rd gear.Â  “What?!”Â  I can hear you say?Â  “How do you do that?”Â  You say this because you’re probably used to driving a normal gasoline powered vehicle.Â  Let me explain…Â  Internal combustion engines (ICEs) are much different than electric motors.Â  Engines need to always be idling or they’ll die, so they can’t sit at a stoplight without a clutch engaged (we’re only going to think about simple manual transmissions here).Â  Electric motors don’t have that restriction.Â  They sit just fine at 0 RPM.Â  In fact that’s where they have the highest torque. Â  An ICE has to be revved up quite a bit to get optimal power output.Â  Driving in 3rd or even 4th gear is no problem for my little car with its big motor.Â Â  I can go from silently creeping around a parking lot to 55mph in 3rd gear, so this problem didn’t even keep me off the interstate.Â  The only real problem was that I didn’t have reverse.Â  I tried to park strategically so I didn’t need reverse, but if I couldn’t avoid it, I just got out and pushed it back.Â  I’m certain it’s not the first time someone has had to push a Spitfire. 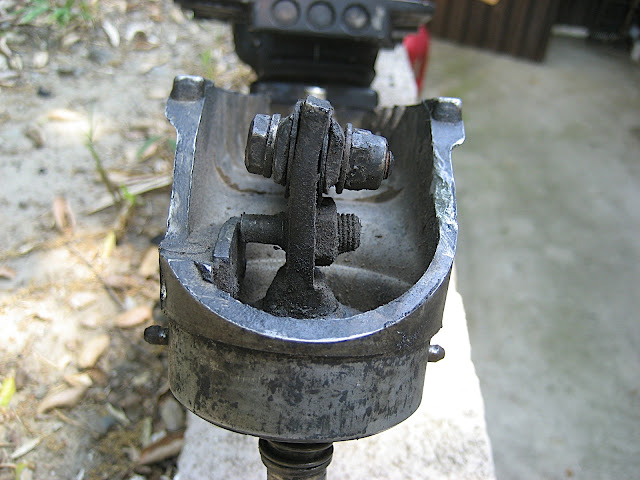 That's all it takes to prevent shifting

It was getting just a bit annoying though, so I decided to try and fix the problem.Â  I pulled out some carpet and the transmission cover so I could get at the oily bits.Â  After a bit of fiddling, I found the culprit.Â  The linkage was ever so slightly bent and this prevented the gears from being able to shift.

So I pounded it straight again and put everything back.Â  But something was still wrong.Â  I still couldn’t get out of 3rd.Â  I pulled everything off again and took a look inside of the gearbox.Â  And something didn’t look correct. 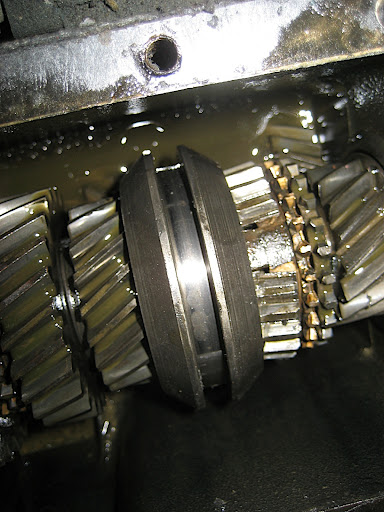 I don’t think those gears are supposed to splay out like that.

The gear to the right of the ’60s space ship thing is supposed to be a split gear, but it’s not supposed to be splayed out like it is.Â  Something bizarre must’ve happened.Â  It’s keeping the gear selector from moving.

Well, that sucks.Â  I asked the Spitfire pros on a Triumph forum for advice.Â  They all say that I’ll have to completely pull the transmission and rebuild it.Â  Ugh.Â  Not what I wanted to hear.

Now, I’ve been toying with the idea of pulling the transmission completely anyway.Â  It’s really not needed for my small car.Â  I used to drive around exclusively in 4th gear because it was the quietest.Â  4th gear has a 1-1 ratio, which was simulating direct drive.Â  So I have two options:Â  1. Repair the transmission, get back on the road quickly, but fix a part that I’m going to toss out anyway.Â  2. Do the upgrade and have a quieter, lighter car, but spend at least a month and maybe more building mounts and figuring out problems like reverse and the speedometer.Â Â  What to choose?Â  I haven’t made any commitments, but I’m leaning towards pulling the transmission for good.Â  This means I’ll miss out on those sweet spring/early summer months of perfect convertible driving weather.Â  But maybe those temptations will keep me motivated to work harder.