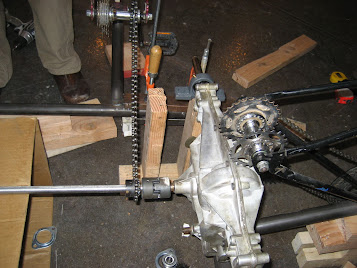 Now that we had the basic frame in place, it was time to figure out how our drivetrain was going to fit inside.Â  My model had the transmission behind the rear pilot, but with the hardware in front of us we figured out that we could just barely put the transmission in front of him.Â  This greatly simplifies the attachment points for the rear suspension and shortens the vehicle overall.Â  We had to make sure there was clearance for his legs, but a simple jig helped us determine everything we needed to know.

We also made some progress in welding up the sprockets for the drivetrain.Â  We bought a handful of sprockets from the Bicycle Kitchen so we could start welding the larger ones to our bicycle hubs and the smaller ones to the hubs that will fit on the main driveshaft.Â  So far so good. 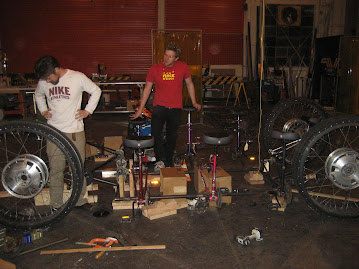 Starting to come together in our heads.

The next big hurdle was to figure out how exactly our suspension was going to work.Â  Suspension is an important feature of 4 wheeled contraptions.Â  We have to figure out how to get the weight supporting the pilots over the suspension points so the springs can compress (as most are designed to do).Â  I think this means that our table top will become a part of the structure of the bicycle.Â  This will allow us a large moment and it will result in some strong triangles for support.Â  I just hope we can build something that’s not only strong but light and beautiful. 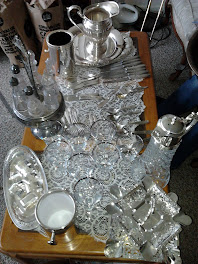 Part of our first haul!

On the next day a group of us loaded up on mimosas and headed down to the PCC Flea Market to begin scouting for the decorations that will top our lovely banquet table.Â  I had set aside money for the decorations of the sculpture, so I didn’t feel bad about spending it.Â  The goal of the project isn’t just to make an interesting engineering sculpture, but to also make a work of art.Â  We combed through hundreds of vendors looking for objects that might help us out.Â  Prices fluctuated wildly between them.Â  We picked up deals were we could.Â  If you would’ve told me that I’d be having fun shopping for silver tableware I would’ve thought you insane.Â  The mimosas helped. 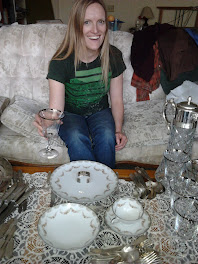 We'll have to work on our pinky placement.

Among the items we scored was a very large set of Japanese fine china.Â  It came with everything from plates to teacups, a gravy boat, and a few serving dishes.Â  We’ll definitely get some use out of this set.Â  You might be asking: “Won’t the items jiggle off the bike while you ride?”Â  Stay tuned for future blog posts where I’ll discuss my solution for that problem.

We still need a nice table cloth, and a chandelier for overhead.Â  As always, I’ve got ideas, but not enough time to execute them at the moment.